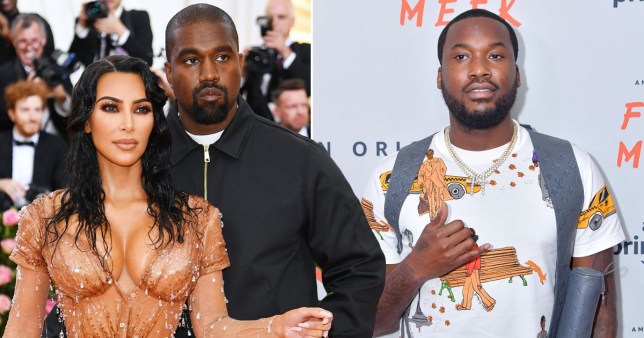 Kanye claimed he has been trying to end his marriage to Kim since she met with the rival rapper about prison reform in November 2018.

Kim begged the world to have compassion for her brilliant yet complicated husband because of his bipolar diagnosis amid claims she was seeking advice from divorce lawyers.

Unable to resist getting involved further, Nicki Minaj’s ex dished up some advice for the famous couple as their family begun to fall apart.

The musician advised the Kardashian clan never to give outsiders the power to think they can tear a family apart.

He wrote: “Never let outsiders think they can break the family up!”

Meek found himself at the center of Kanye and Kim’s crumbling marriage.

In a Twitter firestorm, Kanye hinted his wife had been unfaithful when he said he had been trying to divorce Kim since she met Meek at a hotel room.

He wrote: “I been trying to get divorced since Kim met with Meek at the Warldolf for ‘prison reform’…

Kanye claimed he has been trying to end his marriage to Kim since she met with the rival rapper about prison reform in November 2018 .

“I’m worth 5 billion dollars and more than that through Christ… But ya’ll ain’t listen to MJ and now ya’ll believe them???”

Already Meek seemed to say Kanye was lying about the rival rapper meeting Kim at a hotel room in a tweet when he wrote “S*** is cappp cmon” as “cap” is slang for lie.

At the time, the activists spoke out about mass incarceration and wrongful convictions.

In the fallout, Kim tried to get people to have compassion for her husband and his mental illness.

She wrote: “As many of you know, Kanye has bipolar disorder. Anyone who has this or has a loved one in their life who does knows how incredibly complicated and painful it is to understand.

“I’ve never spoken publicly about how this has affected us at home because I am very protective of our children and Kanye’s right to privacy when it comes to his health.

“But today, I feel like I should comment on it because of the stigma and misconceptions about mental health.”

Behind the scenes, it’s claimed she was meeting with divorce lawyers.