Crowned Queen of 2019 Miss Europe Continental Ghana and her Runners up have expressed utmost disappointment in organizers of the beauty pageant for failing to fulfill their part of the obligations.

Crowned Queen of 2019 Miss Europe Continental Ghana and her Runners up have expressed utmost disappointment in organizers of the beauty pageant for failing to fulfill their part of the obligations.

Their vexation comes after when the CEO of Jsite Managemnent Agency, Joel Armah revised their contracts after they were crowned winners of the competition.

Dahamani Tung-Teiya, crowned Queen of the 2019 edition of Miss Europe Continental Ghana and her two runners up, Rosemond Anum and Maxine Nana Adwoa Amoako narrated their shocking and horrible ordeals from the start of the competition to the end.

In an interview with Kasapa Entertainment Show host, Kojo Preko Dankwa on Kasapa 102.5fm, the three ladies stated that prior to the grand finale of the competition contracts was presented to them to sign with all benefits captured.

However, a new contract was also given to them weeks after they were adjudged winners of the competition with the benefits revised by the organizers.

Organizers unfulfilled commitment in the first contract presented to all potential winners of the competition state that;

Contrary to the initial contract terms, organizers failed to fulfil their main obligation to the three winners by paying for their trips to Europe and Nigeria. 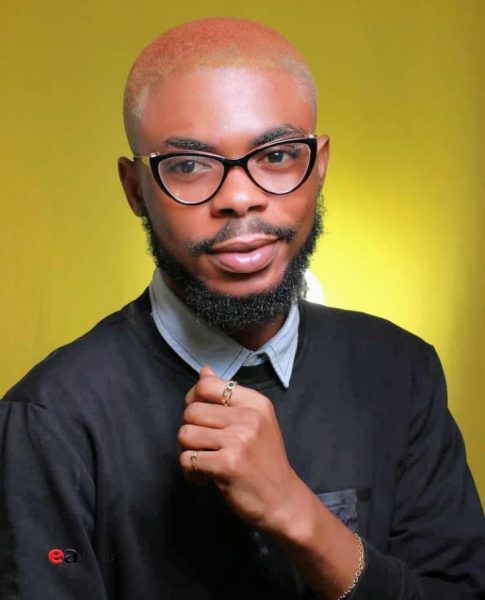 The winners narrated their unpleasant experiences when they were forced to sell coupons for the organizers at the Accra Mall and at other locations, they also took photoshoots and paid for their own costumes, venues for the shoots all for points to win the ultimate crown.

Beyond the experiences shared by the Miss Europe Continental Ghana Beauty Queens, every reasonable individual would agree that, asking young vulnerable women to move about selling coupons from one place to the other in a country where sexual harassment is high, clearly suggests one thing that money has always been placed ahead of the interest of these young girls by those requiring them to do so.

The revised contract given to the winners captured that the winner has to fund her own trip to Europe [Italy] and the two Runners up to also fund their own trip to Nigeria to reprsent the Ghana.

In their bid to quiz organizers on why the contract has been amended, the CEO of Jsite Management Agency, Joel Armah stripped them of their title and illegally crowned Alice Nar Obodia as the Queen of the 2019 Miss Europe Continental Ghana beauty contest and to represent Ghana in Italy [Naples] in November this year.

When asked by the host if they truly deserve the crown, the Queen, Dahamani Tung-Teiya, confidently stated that she excellently performed all tasks given to her by the organizers and that is why she was crowned the Winner after the competition.

Rosemond Anum, 1st Runner Up, told Kojo Preko Dankwa, she believes she was favoured by her boss, CEO of Jsite Management Agency. Maxine Nana Adwoa Amoako, the 2nd Runner Up said she also believe that the compliment about her nice legs from the CEO of Jsite Management  Agency could be the reason she placed third at the just ended Miss Europe Continental Ghana.

It is obvoius that Joel Armah exploits these young women her organisation crowns Miss Europe Continental Ghana for his personal gains.

Kojo Preko Dankwa tried contacting the Joel Armah, CEO of Jsite Management but he refused to comment on the issue.

“My name is Teiya, winner of the just ended Miss Europe Continental Ghana 2019. Entering the competition we were promised that the winner will be taken to Europe fully funded, to represent Ghana in the world finals.. After every hard work the competition came to a successful end and I emerged winner.

3 weeks ago the organizers presented a contract to my runner ups and I and in the contract everything was different from what they promised.

The last straw that broke the Camels back was when they stated that I need to fund ( buy my own tickets) to Italy and back.

I disagreed and point out to them that we were promised that the winner will be fully funded to Italy and for that reason I can’t buy my own tickets.. the CEO then told me that if I’m not ready to fund my own tickets, “he’ll get a lady who is ready to fund her tickets and will represent Ghana.

Sincerely I thought that statement was just out of confusion but to my dismay this evening a contestant saw a video of a strange girl introducing herself as miss Europe continental Ghana and wearing my crown.

I feel soo hurt and cheated and for this reason me and my runner ups need justice . We humbly plead.” 2019 Queen of Miss Europe Continental Ghana

See below for full details. 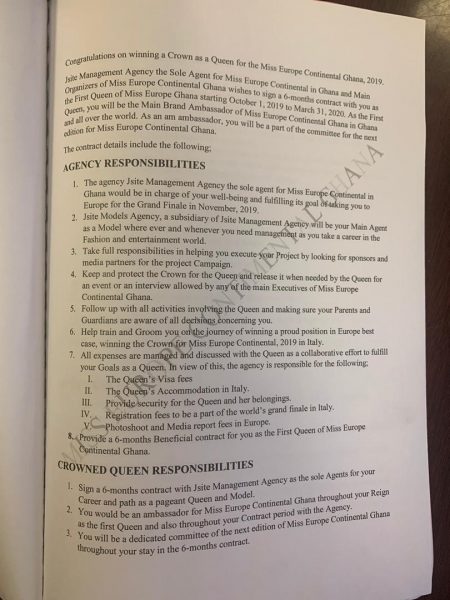 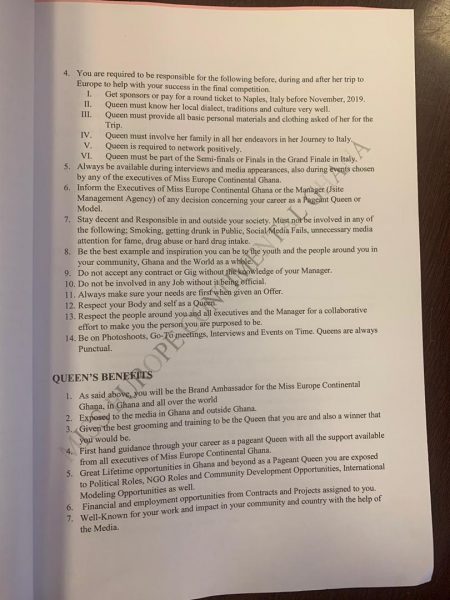 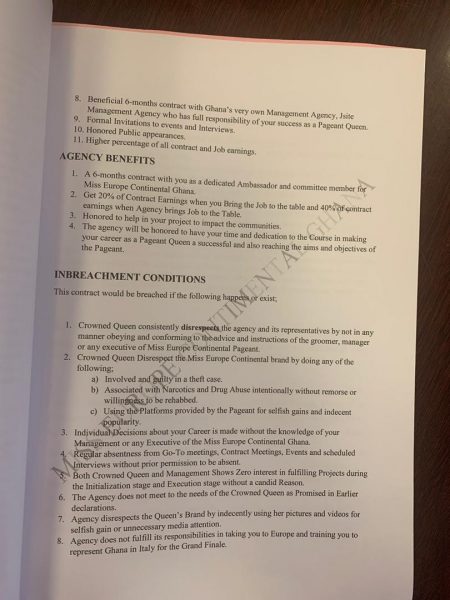 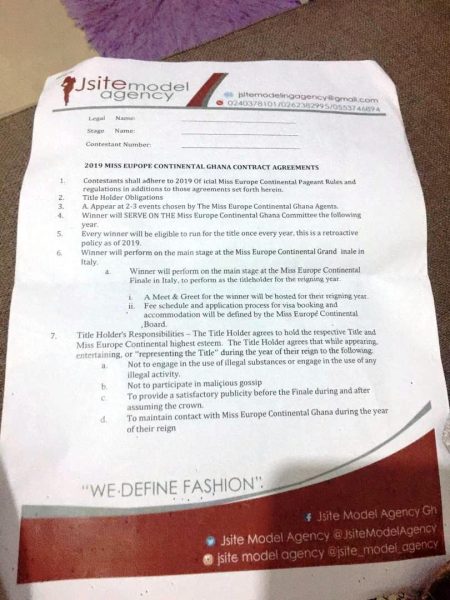 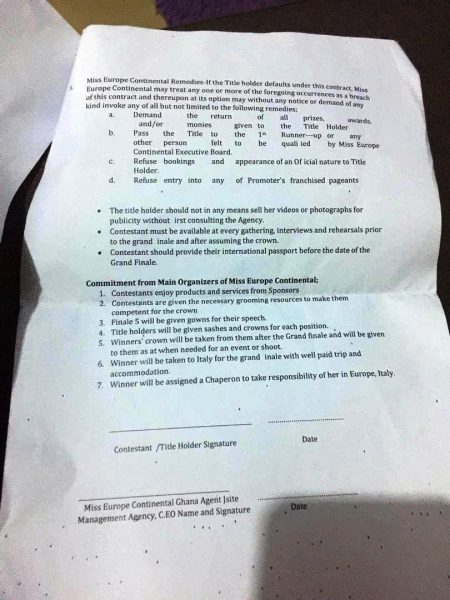 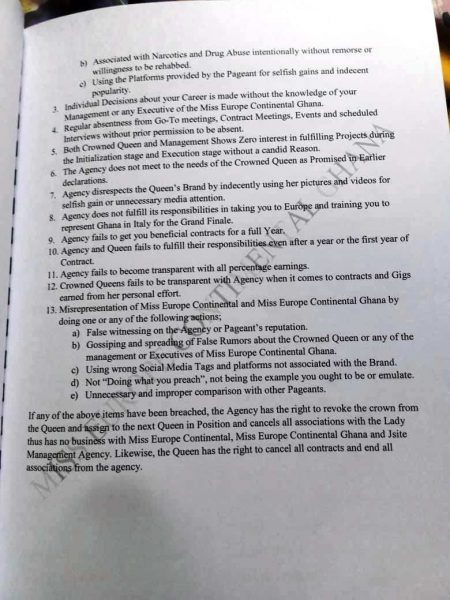 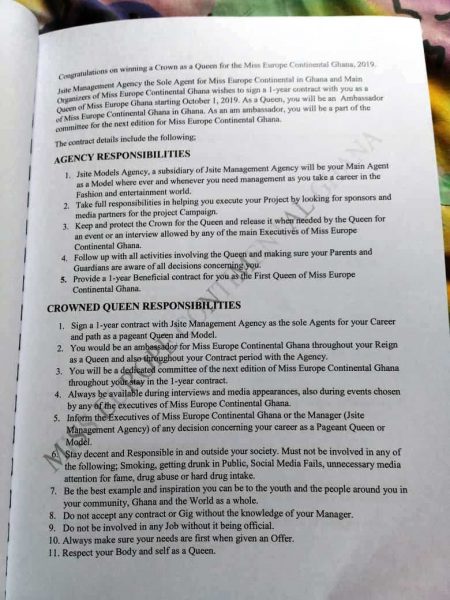 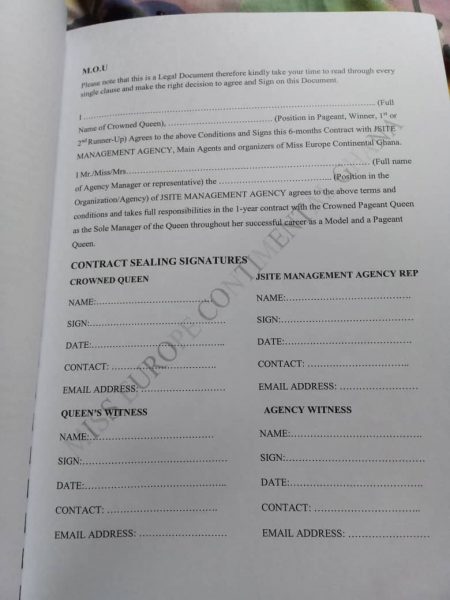 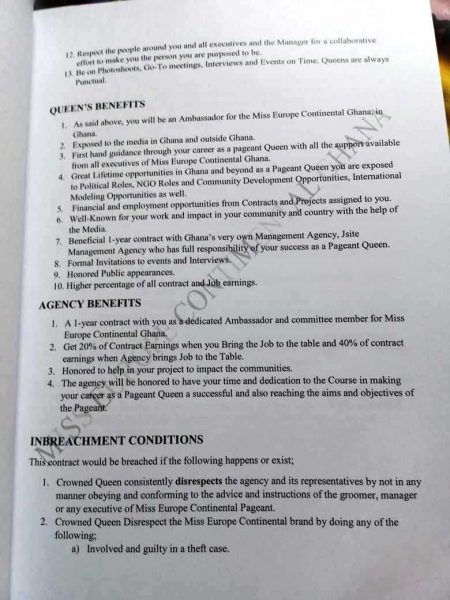 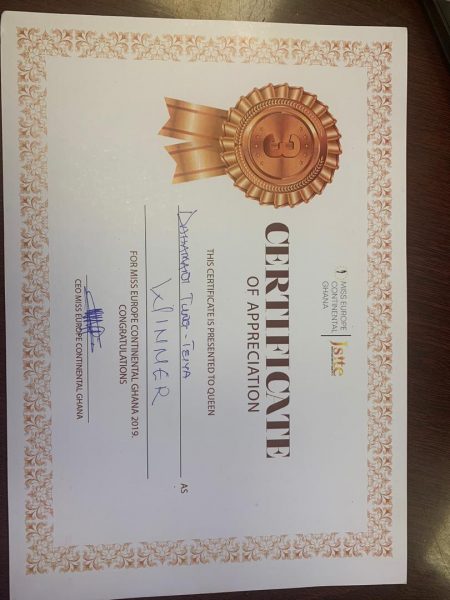