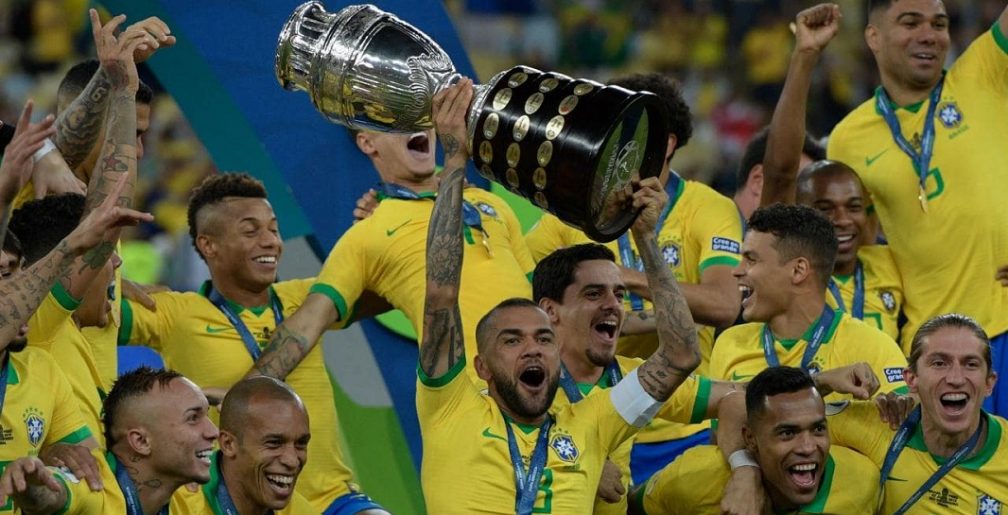 Dani Alves has become the first footballer to win 40 trophies after his Brazil side won the Copa America – the right-back’s second Copa trophy.

The 36-year-old, who captained the side, also won the Best Player of the Tournament award in a star-studded field.

The Selecao saw off Peru 3-1 in the final at the Maracana on Sunday, to seal their first Copa triumph since 2007.

They took the lead through Everton after a wonderful cross from Gabriel Jesus.

Jesus was sent off in the 71st minute after two yellow cards, but Brazil held on and sealed the game through a Richarlison spot-kick in the final minute.

They were inspired throughout the tournament by the ageless Alves, easing the pain of a disappointing home World Cup in 2014.

It was Alves’ fourth international trophy, with a pair of Confederations Cups added to his Copa victories.

He won five trophies with Sevilla before making the move to Barcelona in 2008.

It was at the Camp Nou he got his hands on the majority of his trophies, winning an incredible 23 tournaments with the Blaugrana in eight years in Catalonia.

He moved from Barca to Juventus in 2016 and scooped up the Italian double in one season in Turin, before switching to Paris Saint-Germain two seasons ago.

He collected six trophies in France, including the double in both seasons, and is now a free agent.

His former international team-mate Kleberson, who saw out his playing days in the United States, has said he would like to have seen Alves make the move to America, but sees him as a good option for European Champions Liverpool.

“I feel maybe he could fit in well at Liverpool,” the former Manchester United man said ahead of Sunday’s final.

Alves has also been linked with a dream return to Barcelona, where he won three Champions League titles, after he said he would not return to PSG next season.

Wherever he ends up next season, Alves will bring an unprecedented trophy haul with him.