#AFCON2019: Madagascar shock Nigeria to finish top of Group B

A catastrophic error from centre back Leon Balogun and a sumptuous freekick from Total Man of the match Carolus Andriamahitsinoro saw debutants Madagascar shock pre-tournament favorites Nigeria 2-0 and... 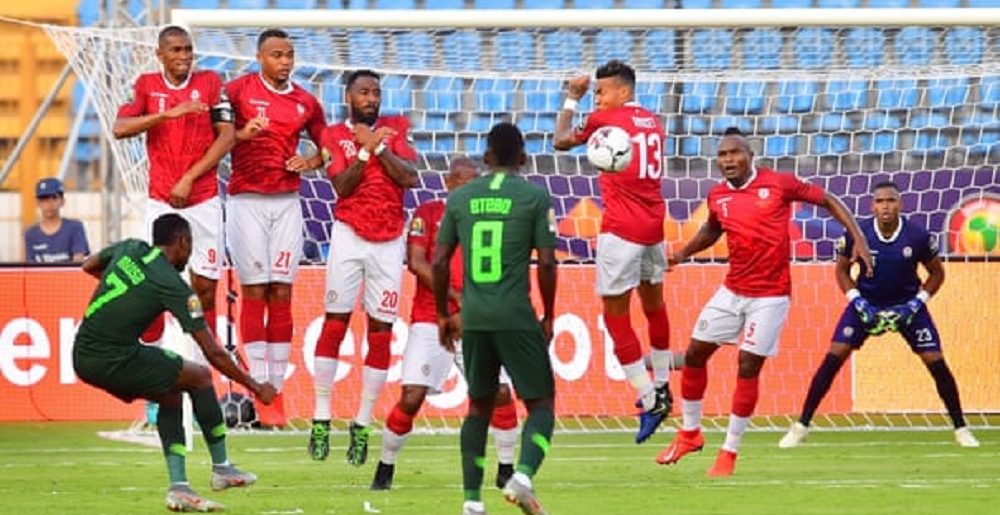 A catastrophic error from centre back Leon Balogun and a sumptuous freekick from Total Man of the match Carolus Andriamahitsinoro saw debutants Madagascar shock pre-tournament favorites Nigeria 2-0 and finish top of Group B.

The islanders continued writing their beautiful story at the Total Africa Cup of Nations (AFCON) Egypt 2019, remaining unbeaten in the group stage matches to finish on seven points. They will meet one of the four best placed number three teams in the last 16.

With the defeat, Nigeria finish second and will meet the second placed team from Group F in Alexandria next weekend. Elsewhere in Cairo, Guinea beat Burundi 2-0 in the other Group B clash. Guinea has four points and is hoping to finish as one of the four best third placed teams.

Madagascar went to the break a goal up, and deservedly so. They had been more patient in the build-up, stuck to their shape and when they had an opportunity, broke on the counter.

They were handed a gift on a golden platter by Balogun who fumbled with a pass before Nomenjanahary pounced and rounded keeper Ikechukwu Ezenwa to break the deadlock after just 12 minutes.

Ezenwa was coming in for his first match being among the changes effected by coach Gernot Rohr from the 1-0 win against Guinea. Others who came in were skipper John Obi Mike, William Troost Ekong, Samuel Kalu and John Ogu.

In a slow start to the game, Nigeria had the first sniff at goal in the eighth minute when Ahmed Musa’s freekick from the edge of the box after Odion Ighalo was fouled going over.

In the 18th minute, six after they had conceded, Nigeria came close when Kalu picked the ball on the right before making an attempt with a curling effort off his left boot that went just wide.

On the half hour mark, Romain Metanire made a superb tackle to poke the ball off Musa’s feet as he prepared to tap into an empty net after the winger had picked up a cross inside the box before rounding the keeper.

Nigeria started the second half with Rohr making a switch, Ogu coming off for Wilfred Ndidi who had been rested.

But, Madagascar were not about to have their backs against the wall and eight minutes into the second half, when Andriamahitsinoro stood behind a freekick, it was all sealed. He curled the ball beautifully and it deflected on the end of the wall before dipping past Ezenwa.

Nigeria sought to give an immediate reply and Ndidi came close with a shot on the half turn that went straight into the keeper’s arms. In the 65th minute, Etebo had a chance with a freekick, but he hit it slightly over the bar.

Rohr made more changes, Alex Iwobi coming on for Mikel while Kalu paved way for Moses Simon. But, the die was cast and the jury was out, The Barea kept their three points.

I am so delighted because of how we played today. I am very proud of my players and I would like to congratulate them for this result. It was a job well done and this is a big victory for us.

I was happy when I learned about the groups because we were playing good teams and we had a chance to prove ourselves. I am happy that we did.

This is a proud day for every Madagascar player and all the people back at home. We were saddened with the tragedy that happened on the Independence Day and we wanted to give the Malagasy people a gift.

We are pleased and more so to finish top of this group and beating a big team like Nigeria.

We lost to a good team because Madagascar was the first to qualify for the tournament and there is no shame in losing to such a team.

Madagascar was the better team today. We started with giving them a gift and after, we could not find a solution. We made five changes because we wanted to give rest to some players and also preserve those with cards.

Sometimes it happens when you are already qualified; the players are relaxed and playing easy.

I think this is a wake up call for us, today, we played very poorly, we were relaxed and our mentality was not very good. Probably it is because we were already qualified but this game has shown us that there is no easy team in this competition.

We have to go back, regroup and ensure we do well for the next game which is a match with no room for mistakes.