President Akufo Addo is in Trinidad and Tobago, the third stop of his five-nation Caribbean tour to promote Ghana’s 2019 “Year of Return” initiative. The President touched down at... 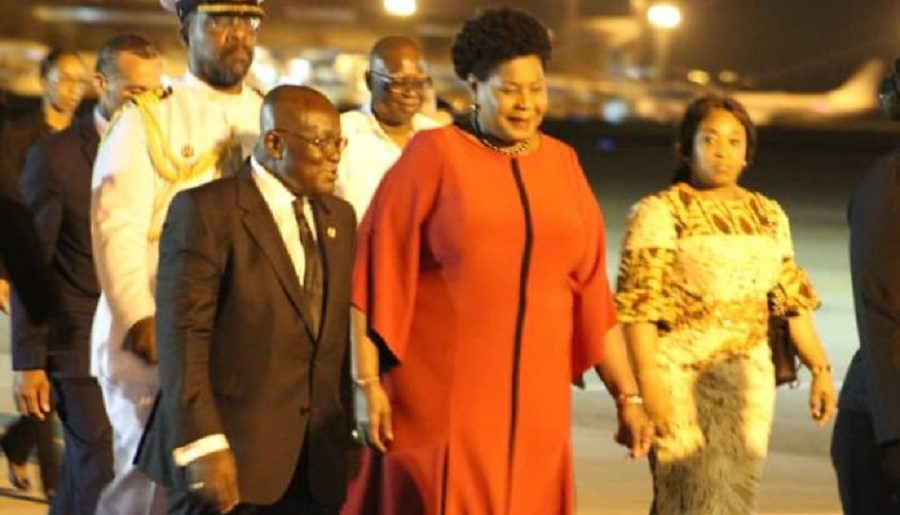 President Akufo Addo is in Trinidad and Tobago, the third stop of his five-nation Caribbean tour to promote Ghana’s 2019 “Year of Return” initiative.

The President touched down at about 11 pm local time in Port of Spain, the capital city of the Caribbean nations on Wednesday, June 12, 2019.

President Akufo Addo was met on arrival at Piarco International Airport by the President of Trinidad and Tobago, Paula-Mae Weekes.

President Akufo-Addo is leading a Ghanaian delegation, comprising the Minister for Foreign Affairs and Regional Integration, Shirley Ayorkor Botchway, and the Minister for Tourism, Arts and Culture, Barbara Oteng Gyasi, MP for Prestea Huni Valley, on the tour.

The countries visited so far by the President are Guyana, St. Vincent and Grenadines, and now Trinidad and Tobago. He will also visit Barbados and finally Jamaica.

Having proclaimed 2019, as the “Year of Return” to Ghana, the 400th anniversary of the commencement of the Trans-Atlantic Slave Trade, when the first 20 West African slaves landed in Jamestown, in the Commonwealth of Virginia, the commemoration, according to President Akufo-Addo, “is a statement of our determination that never again should the African peoples permit themselves to be subjected to such dehumanizing conditions, sold into slavery, and have their freedoms curtailed in order to build up forcibly countries other than their own, and create wealth for the peoples of unknown lands to which they were sent, wealth from whose enjoyment they were largely excluded.”

The events of the “Year of Return” are, above all, aimed at solidifying relations with descendants of Africa, resident in the Americas and the Caribbean, who have been defined as the Sixth Region of the Africa Union.

During the Trinidad and Tobago stopover, the President will on the 13th of June 2019, lay a wreath at the Memorial Park in the capital city, Port of Spain.

He will subsequently pay a courtesy call on the President and Commander in Chief of the Trinidad and Tobago Armed Forces, Paula-Mae Weekes. He will proceed to the office of the Prime Minister of Trinidad and Tobago, [the Diplomatic Centre], Dr. the Honourable Keith Rowley, for a private meeting, a by lateral session, a Luncheon, after which both leaders will address a Press Conference.

The President and his entourage will depart Trinidad and Tobago in the morning of the 14th of June 2019 en route to Barbados, the last but one stop of his Caribbean tour.