Your achievement will inspire youth of Ghana – Prez. Akufo Addo to Kofi Kingston

President Akufo Addo says the reigning World Wrestling Entertainment Champion (WWE), Kofi Kingston, is an inspiration to the youth of Ghana having worked hard to attain the top spot... 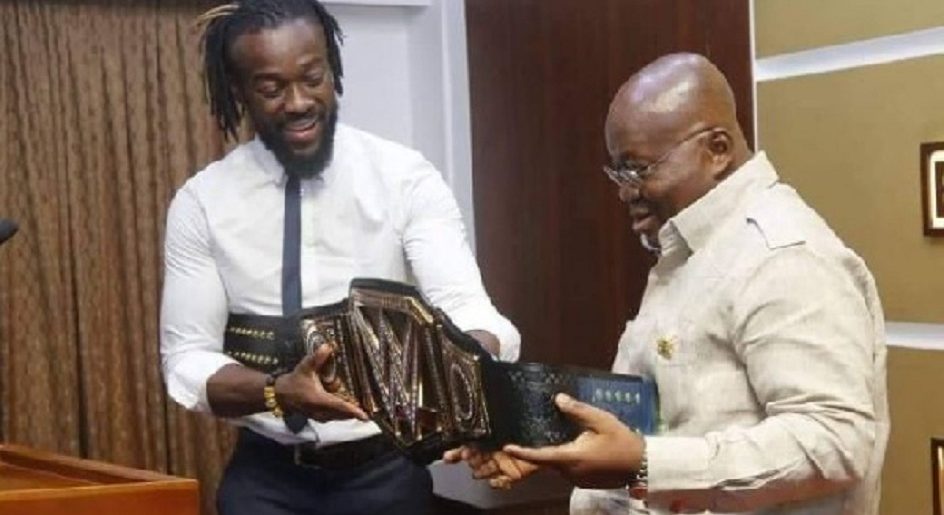 President Akufo Addo says the reigning World Wrestling Entertainment Champion (WWE), Kofi Kingston, is an inspiration to the youth of Ghana having worked hard to attain the top spot in the sport.

The President made the assertion when he received Kingston and his delegation at the Jubilee House as part of his four-day visit to Ghana.

“I think that this visit will touch the heart of some young people in Ghana who will one day also want to become WWE Champions,” stated President Akufo Addo.

The President further added: “I have been following you on DSTV and I am very proud to see you. The work that you are doing and the success that you are having is a very good advertisement for Ghana.”

The President observed that looking at the physique of the WWE Champion, he was encouraged that one doesn’t have to be a bodybuilder or weight lifter with huge muscles to succeed in wrestling: “You can be as slim as you and be able to do it and that is very encouraging for other slim people like you.”

In a brief remark, Kingston expressed his sincere appreciation to the President for inviting him home as part of the ‘Year of Return’ initiative.

He presented to the President on his own behalf and on the behalf of the World Wrestling Entertainment, a commemorative WWE Championship belt as a token to honour the President. In return, the President offered his visitor, a ‘Year of Return’ scarf.

Wiyaala to speak at Cambridge University’s ‘Africa Together’ conference