"It means so much because I always feel a connection to Ghana. Always! Always but it is different to be here. You know to be on Ghanaian soil. 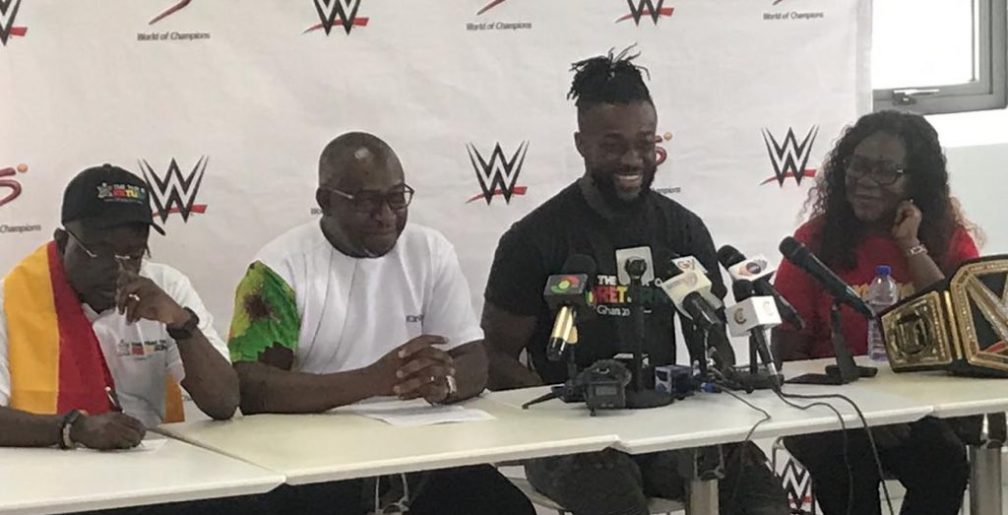 He shared his excitement about visiting his birth of country for the first time in 26 years during a press conference Thursday.

“It means so much because I always feel a connection to Ghana. Always! Always but it is different to be here. You know to be on Ghanaian soil. Like you said, i have many tattoos on my back. They also represent different traits by which i try to live my life by so to be able to do do, and not put Ghana on the map because we are already on the map but to to let everybody know how proud I am to represent… it just means the world,” stated Kingston.

“Again for me to be able to inspire young Ghanaian kids to follow their dreams is also important. To me, that”s the most important thing. Again being here on Ghanaian soil is awesome. I feel like I am back home and it feels really good.”

The professional wrestler born Kofi Nahaje Sarkodie-Mensah is in Ghana for a 4-day visit. Kingston is expected to meet Nana Addo Dankwa Akufo-Addo, the President of Ghana, and the Asantehene Otumfuo Osei Tutu II.

He would also visit Ejisu and Atwima Techiman, the birth place of his parents.

Since bursting on the WWE scene in 2007, Kingston has established himself as one of WWE’s premier high-flyers. That, paired with his upbeat attitude, made him a perennial favorite of the WWE Universe as he racked up Intercontinental, United States and Tag Team Championships. Kingston also cemented his place in WWE history with a series of daredevil moments where he saved himself from elimination in several Royal Rumble Matches.

When he joined forces with Big E and Xavier Woods to form The New Day, though, no one could have guessed that the trio of unicorn horn-wearing, Booty-O-chomping Superstars would achieve the feats that they have in WWE. In fact, the WWE Universe despised them at first, but soon grew to love them.

As the veteran member of the team, Kingston provides his wealth of knowledge to his younger compadres, and it has paid off. Not only has The New Day become one of the most popular factions in WWE history, but ya boys have held multiple Tag Team Championships between their stints on Raw and SmackDown LIVE, including the longest reign in WWE history – an astonishing 483 days.

Kingston’s 11 years of hard work and dedication finally brought him to the dance at WrestleMania 35 where he challenged Daniel Bryan for the WWE Title. With the entire WWE Universe behind him, as well as his New Day brothers and the SmackDown locker room, Kofi beat Bryan to claim WWE’s ultimate prize. It just goes to show what the Power of Positivity can accomplish.

#Rapper101 is not targeted at anyone… it is a witty take on how to be a rapper – M.anifest