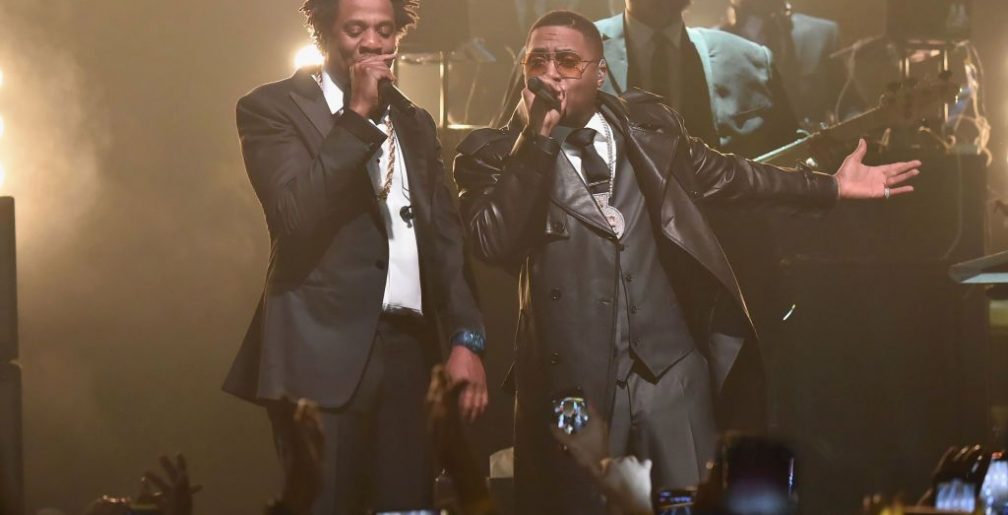 “I’ve known him for 30 years, and this might be the most ignorant my boy gets,” DJ Clark Kent said with a smile. “And you all get to see it firsthand.”

A show of Jay-Z’s B-sides and cult favorites isn’t by default “gutter,” as Kent took to describing the star-studded performance that doubled as the reopening of New York’s storied Webster Hall, for his discography is simply too varied. But it certainly gave the rapper an opportunity to tap into a specific cross-section of his discography that he doesn’t always have the chance to imbue with his elder statesman charisma and wisdom the way he does with tour staples like “Izzo (H.O.V.A.)” and “Hard Knock Life.”

The giddy floor-level crowd spent much of the build up with their necks and phones angled upward to snap pictures of the massive rotating Roc-A-Fella logo chandelier and the celebrities in the balcony, roared with approval. There isn’t much stylistic unity in the crowd at a Jay-Z show where ticket prices start at $250. One quick glance around the venue reveals a mid-40s guy in an apparently unironic visor performatively arguing with his wife, vintage Jay tour merch paired with Timbs and camo pants, and some even trying to match Mr. Carter by donning evening wear of their own. Were it not for the Roc Nation hats dotting the crowd, it would have been tough to glean the crowd’s connective thread.

Jay emerged at around 10:30 p.m., elegant in a black tuxedo, bowtie, and diamond necklace dangling from his collar. He began with Kingdom Come’s “The Prelude,” one of the only tracks from that era to have the requisite grit Clark Kent was looking for. From there, a spry Jay-Z reeled off “Some People Hate,” ‘Don’t You Know,” and “A Million and One Questions.” While there have been some questions about his technical skills eroding over time, due in part to his recent penchant for slower beats and more languid flows, Jay-Z came out sharp, dodging and weaving atop the crisp drums and rumbling bass of his live band.

Frequently, Jay-Z connected not only the dots between his own past and present, but also hip-hop’s more broadly. He let a portion of the Notorious B.I.G.’s “What’s Beef” dissolve into the Meek Mill track “What’s Free,” and delivered his standout guest verse with veteran elegance, more focused on sharing his sermon on systemic racism, the dark truths of America’s founding, and the power that comes through ownership than staying perfectly in time with the beat.

The throwback setlist clearly had the rapper feeling nostalgic, as he shouted out DJ Kool Herc, who was in attendance, and the city of New York in its entirety. As he launched into “This Life Forever,” Jay-Z remarked that it was his longtime friend Tyran “Ty Ty” Smith’s favorite song.

But while much of the reflection Jay-Z was doing took on a victorious, warm tone, the gritty past and grim present merged at several poignant moments. The effect of time on Hov’s perspective was never felt more keenly than when “Where I’m From,” gave way to “Marcy Me.” The former is confrontational and immediate, with a violent summer lurking around the corner in the projects, while the latter takes more of a bird’s eye view on both the tragedy that’s affecting the people of Bed-Stuy (“I’m from Marcy Houses, where the boys die by the thousand) and the borough at large (“Old Brooklyn, not this new shit, shit feel like a spoof”). That moment also proved how crucial Jay-Z’s early work was in getting him to the point where he can zoom out, since he spent the first decade of his career turning a clever and ruthless pen to the granular details of the bleak circumstances he rose above.

Even more sobering was Jay-Z’s performance of The Blueprint 2’s “Some How Some Way,” which slowly morphed into a stirring, stripped-down freestyle tribute to Nipsey Hussle.

“Gentrify your own hood, before these people do it / Claim eminent domain and have your people movin’ / That’s a small glimpse into what Nipsey was doing / For anybody that’s still confused as to what he was doing,” he rapped, leaning emphatically into the mic.

Jay-Z, a staunch supporter and admirer of Hussle’s, clearly saw plenty of himself in the Los Angeles entrepreneur who was also a Roc Nation client. Much of the best music Hussle made before he passed played like the brunt of the mid-2000s catalog Jay-Z was drawing on. It was equally concerned with the traumas of the past and the promise of the future, and Nipsey’s passing means Jay’s voice must be even louder when espousing their shared vision of empathetic and ethical black capitalism.

The elegance of the band and Hov’s sartorial choice most naturally connected with the handful of American Gangster cuts he broke out, including “Sweet,” “No Hook,” and “Success,” which featured the first of two starry cameos, as Nas emerged to deliver his verse over the thunderous organ and crackling snares and hi-hats.

Knowing the power of the moment, the pair quickly jumped back more than two decades to what is often considered the foundation of their beef, as Nas’ “The World Is Yours” blended into Jay-Z’s “Dead Presidents II.” The coordination between that medley and the ensuing one of “N.Y. State of Mind” and “Bring It On,” which originally was supposed to have a Nas verse, showed that this was far from a spur-of-the-moment decision.

The next appearance came from Cam’ron, who performed “Welcome to New York City,” and Jim Jones, who joined for the Dipset standard “I Really Mean It.” “[Cam] ain’t my enemy. Nas ain’t my enemy. They’re my brothers,” Jay-Z said.

The back third of the set saw Jay-Z reeling off cuts like “Friend or Foe,” “In My Lifetime,” and a searing rendition of the bittersweet “Dear Summer,” making it clear that retirement seems as unbelievable for him today as it did when the track came out back in 2005. The set wound down with an airy, jazz-inflected iteration The Blueprint III’s “Thank You,” though it couldn’t quite sustain the emotional high of “Dear Summer.”

“I envisioned how this night would go. I would lose you after a couple songs, but y’all stuck with me,” he joked, never for a second belying any real concern that the crowd would be anything less than locked in. After all, this was a man who just answered a rhetorical question about how he’s stayed so good for so long, “I do this in my slumber, Summer.”