The much-awaited ‘Made in Ghana’ album by Okyeame Kwame has been launched. The launch which took place on Saturday, April 20, 2019 at +233 Jazz Bar and Grill saw... 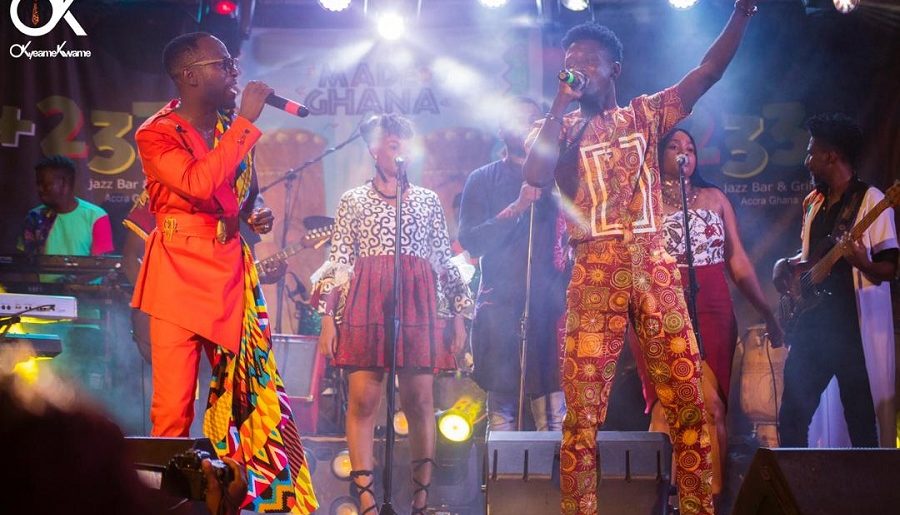 The much-awaited ‘Made in Ghana’ album by Okyeame Kwame has been launched.

This is the first time in the history of Ghana a musician has put together an album which is aimed at promoting local trade and nationalism by highlighting the virtues of all groups of people in Ghana across the various regions and Ghana’s heritage.

The ambience at the venue exuded great sense of national pride.

The programme started with a performance by the Nsroma Dance Group. They welcomed patrons to the venue with traditional songs and dance types that depict a variety of Ghana’s culture.

Okyeame Kwame and Feli Nuna charged the atmosphere with a performance of ‘Melowo,’ a song done in an ‘agbadza’ vein – producing a mélange of Feli’s soothing singing voice and Okyeame Kwame’s rapturous rap vibes.

He returned with WutahAfriyie for the song, ‘Bra.’ After the duet, Afriyie did a couple of his old songs including ‘Bronya.’

This was followed by another performance with Kuami Eugene. They sang the song that represents the Eastern Region – ‘E No Be My Matter’ after which Kuami continued with some of his hits.

Representing the Upper West Region were the Lioness of Africa, Wiyaala and King Ralph who also performed ‘Dia Tina’ with Okyeame Kwame. This session saw display of awesome artistry with a lot of energy.

Atongo Zimba could not be present to do ‘Bolgatanga Girl’ because he had other engagements outside the country. However, promising vocalist, Abiana perfectly complemented Okyeame Kwame’s act on that song with her exceptional vocal delivery.

On the night, Trigmatic reaffirmed his resolve to prove to the world that he was ready to experiment with rhythms that hold prospects for the global marketability of his songs. Unlike his previous commercial and rap induced songs, he did ‘Where We Dey Go’ and other thought-provoking Afro-songs which did not only got patrons to muse over the lyrics but to also hail him for his stupendous performance.

After performances from Kidi and Ayesem, Okyeame Kwame mounted the stage again to entertain the fans with more of his new and old songs.

Kwame proved on the night that he has really honed his craft in the music trade over the years. The 43-year-old musician who was on stage over 4 hours, was able to thrill the audience, making them feel part of the show. Undoubtedly, Kwame is not just a good rapper, but one of the best performers in the country.

Other songs on the ‘Made in Ghana’ album are Yenzimaft Fancy Gadam and NkunimftFeli Finest &Senku, ‘1956’ ftKurl Songs &Ayesem, ‘Kpa’ ft. Wulomei.The songs represent the various regions in terms of concept and the artistes featured.

The programme, chaired by Kwame BaahAcheamfour was also attended by the CEO of Ohene Media, Abraham OheneDjan and the drummer of the late Nigerian Afrobeat legend Fella Kuti, Jojo Kuo, who travelled to Ghana just to be part of the memorable event.

Jojo, joined the carpet band for the programme, Hy-Skuul Band later, to display his drumming skills.

Music lovers can now have a taste of 10 classic tracks (2 bonus songs) on the ‘Made in Ghana’ album via the various online music stores.

The ‘Made in Ghana’ album launch was sponsored by Niche Cocoa, Grand CasamoraHotel, Ahead Media and Joy prime TV.