Black Star International Film Festival opens in Accra, here is what to expect

The Black Star International Film Festival, festival focused on the business of film; creating connections through film, bridging the gap between African Cinema and the world, has opened in... 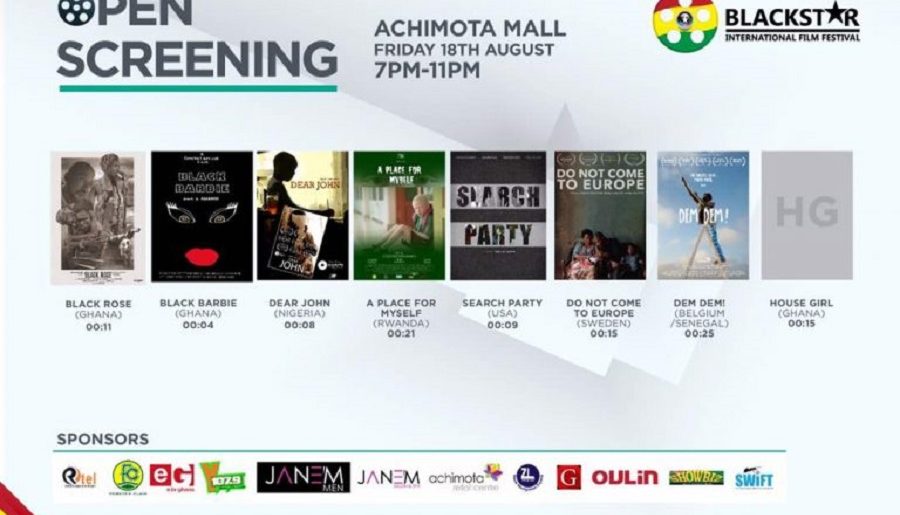 The Black Star International Film Festival, festival focused on the business of film; creating connections through film, bridging the gap between African Cinema and the world, has opened in Accra from August 18-21.

It is a subsidiary of the Black Star International Film Institute, a non-for-profit aimed at film advocacy, creation of global connections through film, and bridging the divide with Africa cinema and the world. The Festival is an annual film festival held in Ghana in its second year.

In its maiden year, 2016, it featured 40 films, shortlisted from 3400 films from across the world. 70 countries participated. 2017 will feature a bouquet of 30 films from major film markets including Academy award winning film, “Moonlight by Barry Jenkins as the opening film as well as the highly – acclaimed “A United Kingdom” by Amma Asante as our closing film.

Theme: For the young at heart

Countries that made it into the festival for 2017

30 Films from around the globe at the Black Star International Film Festival 2017! Besides our Opening Film, the academy award winning ‘MOONLIGHT’ by Barry Jenkins and our Closing Film, the highly acclaimed ‘A UNITED KINGDOM’ by Amma Asante, we are showing films from :

Cultural Immersion in Mantse Agbonaa/Jamestown: This development is one that will annually focus on a different cultural group and will present everything related to its culture – from dance, music, art, and fashion to traditional food and drinks. 2017 focuses on the GA – people of Ghana.

A high level networking opportunity with the goal of fostering business, co-production and cooperation among industry players – from directors, producers and scriptwriters to make-up artistes, actors and fashion designers.

Black Star International Film Festival is excited to introduce 6 awards categories for the year. Each award has a value of 3000$; with the goal of empowering the winning filmmaker to start a new project that promotes the SDGs. We use this opportunity to say thank you to all our sponsors for making this possible… Karen Tanoh is a seasoned Chartered Accountant and a Banker with over twenty-seven years working experience in the Finance and Banking sectors.

She qualified as a Chartered Accountant in the UK with Coopers & Lybrand in Manchester, England. Within the Ecobank Group, she worked in Ghana, Togo, Angola and Sierra Leone and travelled extensively throughout Africa.

Director of the bank in Sierra Leone and Country Manager in Angola with co-ordinating responsibilities for Lusophone Africa. As part of her current responsibilities, Karen is a Non-Executive Chairman of First Atlantic Bank in Ghana, and also serves on the Board of Directors of a number of other companies.

Karen is fluent in French and in a number of Ghanaian languages, she has a working knowledge of Creole and Portuguese. In her spare time, she writes historical fiction.

for urban areas. Karen is a founding member of the Brazil Heritage Foundation.

At the ceremony, she will introduce the Minister

Special Guest of honor at opening

– In attendance will be the Minister for Tourism, Culture and Arts – Mrs. Cathrine Afeku

Sarah Wechselberger, born in Austria, did African Studies, at University of Vienna and at Humboldt University in Berlin.

She has been part of a German – American production starring Jamie Fox and Gabrielle Union in the United States (Sleepless, 2017), assisting the director of the film.

She has also worked in the Native – section at the Berlin International Film Festival.

Sarah holds a degree in pedagogics, has years of teaching experience at institutions such as the internationally acclaimed Berlin Cosmopolitan School and she is also the founder of the kindergarten – project ‘Kipepeo’ in Kigoma/Tanzania.

Dedicated to the Industry, Juliet Asante has been an industry practitioner for over two decades. Juliet is a graduate of the Harvard Kennedy School and mentors on entrepreneurship at Massachusetts Institute of Technology (MIT). Juliet also lectures Mass Communication at Webster University and is a graduate of the New York Film Academy, the National Film & Television Institute and Cape Coast University. Juliet is a respected filmmaker on the continent. Her latest film, SilveRain is nominated for “Best film in Africa” for 2015 in the AMVCA awards. The film has garnered over 13 nominations.

Juliet is a regular blogger for the Huffington Post and served on the global council for Entertainment on the World Economic Forum for 2 years. As an Executive Producer, Writer and Director, Juliet was responsible for some of the most successful shows on Ghana Television. She also worked with Mnet on a number of shows including ‘Studio 53’ and ‘Tinsel’ and appeared in the HBO production, ‘Deadly voyage’. Her awards include TIAW’s 100 most impactful women – The True Hollywood Reporter’s Next Generation Personality and – Best Actress in Ghana for 2009.

As an Entrepreneur, Juliet is the founder of Mobilefliks, a distribution company and CEO of Eagle Productions, a Production company. She is the founding President of the Black Star international film festival.

This year will see a number of free events and some paid for events, as well as some invitation only events

– Day pass – 50 cedis a day takes you to ALL events for the day, except the invitation only events

– the role of film to National development