Track star, gold medalist, and without question the fastest man on the planet Usain Bolt met his match when he went toe-to-toe with 8 year old Demarjay Smith, the Jamaican... 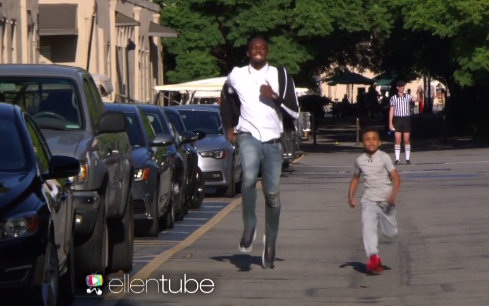 Track star, gold medalist, and without question the fastest man on the planet Usain Bolt met his match when he went toe-to-toe with 8 year old Demarjay Smith, the Jamaican kid trainer who’s viral video inspired many to put down the doughnut and do a push up or two…or ten.

Early this week, Ellen DeGeneres sat with the future fitness guru and asked him when he started taking exercise so seriously, only to learn his love for dips, and push ups began, well, when he turned 8. But the bite size personal trainer in training also had a bigger reason behind his love for fitness.

“I look around the neighborhood to see if kids are exercising, and I see other kids bully them, and that’s why I started exercising so that I don’t get bullied. I had a cousin who was bullied about his size and his weight. I had to do something because, like you see on the T.V. I gotta be fit and strong.”

Demarjay, who wants to be either a personal trainer or a basketball player when he grows up, told the daytime talk show host that if he were ever able to race Bolt, he would without a doubt win. And as we all know, there was no way Ellen was going to allow Demarjay to make such a comment and not have the Jamaican sprinter on hand to see if he can back it up.

In a tense race, Bolt, standing at 6-foot-five inches, weighing 200 pounds was no competition for the maybe 4-foot-3 inch 8 year old, proving that even the mighty will fall.