There comes a time when an unknown voice emerges from hiding, enchants people and gets them wanting more. The positive responses are often gratifying for the simple reason that... 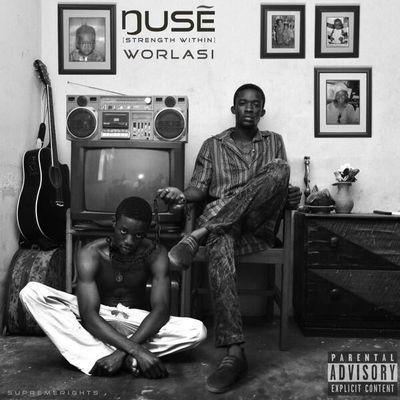 There comes a time when an unknown voice emerges from hiding, enchants people and gets them wanting more. The positive responses are often gratifying for the simple reason that the gamble to put oneŌĆÖs self out there has paid off and the validation grows the confidence of the voice. What is more gratifying is to do this without any formidable track record except gut feelings.

This is what Worlasi did with his album Nus3. I choose to call it an album and not a mixtape as his camp men describe it because, in my estimation, the depth of originality floating on Nus3 renders the definition unfit.

Nus3 just happened. It dropped on us a la J. Cole and his 2015 Forest Hills Drive album. The album was released after a listening session a fortnight ago. No lead singles, just social media promotions. Nus3 was released and got trending on twitter. Massive.

For those who know Worlasi, this feat is unsurprising considering the quality of his past singles-Ay3 Adze, Sarah and Destination. On Nus3, which translates in his native Ewe as Strength Within, he stayed ŌĆśin touch with his soul ŌĆśand delivered this ground-breaking album.

With a style that swings from singing (or ragga-ing) to rapping, Mr. W (as his moniker goes) takes the listener on a trip about self-believe, freedom, love and making merry-elements that each human deserves or desires.

In this post, I render a track by track review of this album.

A spoken word piece accompanied by piano chords featuring a child poet reminding us that ŌĆśthis body we live in is rentedŌĆÖ and the importance of tapping into our inner souls and abilities for the greater good of mankind-finding the ŌĆśbalanceŌĆÖ in life: that balance that kept you from being distractedŌĆÖ so we can ŌĆśhelp another get in touch with his/her soulŌĆÖ.

On this military drumbeat driven track, Worlasi forcefully ask people (critics) to respect his hustle (chosen profession) and the direction he is going with his music. With many a musician especially up-coming ones under pressure to blow up, many choose to follow the norm-put out a this-is-here-for-today hot song rather than one that last forever.

Worlasi is one who is going the route the few brave souls have taken hence his caution:Hey, you got your space/ I got mi space/Shine me shine/ Make I shine Me/IŌĆÖm not a bad guy/But you try getting to my space I go show you say I craze.

A part of Martin Luther KingŌĆÖs ŌĆśI Have A DreamŌĆÖ speech about the struggles of the Negro opens this track. Worlasi features one of the amazing poets of our generation, Poetra Asantewa. With thumping drum, trumpet sound and haunting background voices, Freedom explores how one can break out of the ŌĆścellŌĆÖ of life (fear) which renders humans:The system tries to dictate your future/You try to unzip yourself and youŌĆÖd be made a dress that donŌĆÖt suit yaŌĆ” And in the process of opposing the known to unveil the unknown/All the world sees is stupidity embedded in our anatomyŌĆÖ

Arguably one of the best tracks on the album thanks to the depth of message. Freedom belongs to Poetra rather than Worlasi.

Focus features rappers Empee Raw and Krack Gyamfi. Optimism reeks all over this song which bubbles with an agbadza rhythm. Worlasi talks about not straying off his life goals (Keep fighting/keep your eye on the ball/No bull shy thing). Singing in Ewe and English to drum home his point, Empee Raw and Krack Gyamfi brought some energy to the track. Though the song carries a mid-tempo feel, WorlasiŌĆÖs calmness is evident.

Na So translate from pidgin to English as ŌĆśThat is itŌĆÖ and here Worlasi remind us to enjoy the gifts of life with the people we love. With its guitar/string bass line, switching between Ewe and English lingua, Worlasi admonishes us: donŌĆÖt wait for me to die before you come to my funeral/Call me now make we comot/ And have a good time. You may be forgiven into assuming he featured rapper Lyrical Wanzam.

Violin strings, piano synths hovering over hip hop beats dominate Wake Orp (Up). Wake Orp is about striving for the best in life. The electro-synth chorus (You did it/Worla, You did it) is like an orchestra ensemble where all the instruments, in unison hit a crescendo. Worlasi points to some of the people who inspired his pidgin rap-The Fokn Bois (M3nsa and Wanlov), EL, C-Real and Skillions (obviously LilŌĆÖ Shaker) get honourable mentions. ŌĆśSee me today I say a bi rapper/ One day me too I go pay 25K to feature Busta (Rhymes)ŌĆÖ. No malice intended with this line I guess. This is a personal favourite.

The instrumentations mirrors the classic Lauryn Hill and Bob Marley ŌĆśTurn Your Light Down LowŌĆÖ tune and carries some lush Carlos Santana-esque guitar riffs. On this track Mr. W croons somberly about a relationship gone south (I donŌĆÖt care about my own tears/But I see you babe shed tears/The pain is more than I shed tears/So, baby make it stop). ShikaŌĆÖs lingering soulful vocals despite being trapped beneath the kick and bass, excellently offers shade to the song. One has to acknowledge WorlasiŌĆÖs ability to pick the best voice to feature on his songs. The two sounded amazing, bringing their emotions to bear on it.Feels like IŌĆÖm caught up in a shoot/ And still looks like IŌĆÖm the only one in sight.

Another favourite off the album. That beautiful bass drop and violin strings (is it harmonica?) before his voices makes an appearance is awesome. Possible is about having a positive outlook to life knowing everything can be achieved: you never know who is great or whoŌĆÖs not/You never know until you try/And when you do/you go maybe fall/But go on and try.

And didnŌĆÖt Meche Konnect, the US based songstress just slay with her verse and delivery? ItŌĆÖs like her words were lashing against the beat, reminiscent of Chrisette Michelle on Let Me Win). Notwithstanding the comparison, Meche Konnect killed it.

This piano driven rendition is about the swings of life- how everything can come full circle in the future: You got it all /We ainŌĆÖt got shit but life goes onŌĆ”/We no catch the clouds sef/ they call we stars.

This song explores the paradoxical situation of the black man; where the black man continuously doubt his own abilities and prefers to rely on the expertise of the white man.┬Ā The opening statement of the song is powerful:┬Ā I no barb/ Black man come see white man them dey jump around/Whiteman come see black man see them/ Them dey start run cos black man be scary manŌĆÖ. Black man is a call for self-believe, being self-relaint and eschewing the negative stereotype about the black man.

On this track, Worlasi goes into a conversation with his mum, telling her about his dreams of wanting to be a Superman and save the world (with his music) but not by ending up with a ŌĆśwhite colourŌĆÖ job. The beat is a mix of electro, trap and afrobeat influences giving it an interesting outlook.

Unlooking is a slang to mean ŌĆśnot looking or paying attentionŌĆÖ and here Worlasi talks about how people vow to not succumb to things but end up doing the exact opposite: Fine boy dey pass you frown like you no dey like but you spy am from the corner of your eye/ Shankus dey pass/automatically my guy you go spyŌĆÖ. The African rhythms are too groovy to refuse its call to dance.

This song draw parallels with his previous single Ay3 Adze (Well Done) in terms of instrumentation and singing style (though this beats is up-tempo ).┬Ā The song is a reminder to live happy, smile broadly despite the many obstacles and forget the troubles of the past: why donŌĆÖt you smile? Let it goŌĆ”Whatever has happened is in the past?ŌĆÖ Good advice.

Apocalypse carries a pop-funk rhythm which would get you moving. But, the message in the song is relevantly piercing ŌĆśApocalypse dey come/But be like no bro dey run/ Taxes too dey rise/so be like everybody make wild.

Listening to Nus3 is nothing short of refreshing-from the arrangements to delivery. The album oozes authenticity; a breakaway from the generic hip life/azonto music replete on radio today. Nus3ŌĆÖs strength lies in the lyrics that sit comfortably within these well crafted, infectious jazzy, soul and hip hop and afro beats rhythms which fill the album. Judging by the tons of thoughts expressed on this album, Worlasi comes across as the old soul alive inhabiting a young body.

With Nus3, Worlasi joins a growing legion of young, brave artistes such as Kyekyeku and Delasi who a carving a niche by recording and performing an ŌĆśunpopularŌĆÖ genre of music and earning respect for it.┬Ā The album is yours to Love because there isnŌĆÖt anything to hate.