In the July 27, 2015 issue of New York Magazine, there is an exclusive article of 35 women — “ a sorrowful sisterhood”  — who tell their stories about being... 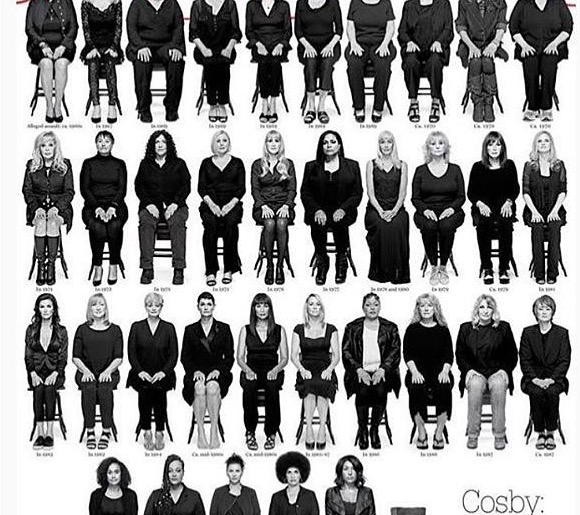 In the July 27, 2015 issue of New York Magazine, there is an exclusive article of 35 women — “ a sorrowful sisterhood”  — who tell their stories about being assaulted by Bill Cosby and not being heard, until now.

The four-part piece features an essay, individual testimonies, portraits that lead to each woman’s account, and videos — the portfolio by Amanda Demme and essay by Noreen Malone.

In the article, Malone shares how hard it was for victims of sex crimes being heard, especially when men had any kind of status:

“In the ’70s and ’80s, campus movements like Take Back the Night and ‘No Means No’ helped raise awareness of the reality that 80 to 90 percent of victims know their attacker. Still, the culture of silence and shame lingered, especially when the men accused had any kind of status. The first assumption was that women who accused famous men were after money or attention. As Cosby allegedly told some of his victims: No one would believe you. So why speak up?”

Currently, there are now 46 women who have come forward publicly to accuse Cosby of rape or sexual assault; the 35 women listed and profiled in the New York Magazine issue are the accusers who were willing to be photographed and interviewed by the publication. The group ranges in age from early 20s to 80 and includes supermodels Beverly Johnson and Janice Dickinson alongside waitresses, Playboy bunnies, journalists and women who formerly worked in show business. Unfortunately, there are others still out there who’ve chosen to remain silent.