Asamoah Gyan was handed an award for his dedicated service during his time at Al Ain in the finalpiece of official business undertaken by the Ghana striker at the... 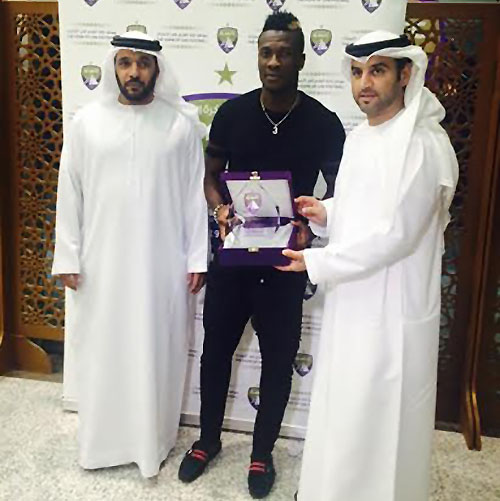 Asamoah Gyan was handed an award for his dedicated service during his time at Al Ain in the finalpiece of official business undertaken by the Ghana striker at the club.

The 29-year-old will be traveling to China on Wednesday morning to sign a new contract with Shanghai SIPG.

Gyan spent four years with the Boss during which period he won three domestic league titles and emerged the top scorer of the Arabian Gulf League for three times as well.

He helped the side to the semi finals of the Asian Champions League last season while also ending that campaign as the top scorer and Best Foreign player in the continental competition.

The Ghana captain’s move to the UAE has proved to be a phenomenal success as he scored a staggering 95 goals in 83 top flight appearances for Al Ain.

His commitment and dedication whenever on the field of play for Al Ain won over the club’s fans and beyound as he became a shining ambassador for more other quality players to have stints in the UAE.

The club recognized the immense contribution made by the Black Stars captain during his time at the club and decided to award him before he emplanes to China to begin a new adventure.

An emotional Gyan in receiving the award took the opportunity to thank the club for their immense support and hospitality throughout his stay in the UAE.

“This club will always have a special place in my heart no matter what happens in future.”

Gyan is scheduled to fly into China by Wednesday afternoon where he will have a medical before signing for Shanghai SIPG.