Rapper, EL has a crush on Radio/TV presenter, Berla Mundi and has no problem letting the world know about it. Remember his verse on the song Segbefia? “chale me... 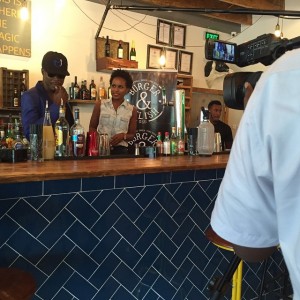 Rapper, EL has a crush on Radio/TV presenter, Berla Mundi and has no problem letting the world know about it.

Remember his verse on the song Segbefia? “chale me I no sh3da get chicks, I be hella choosy but ma GH one ibi Berla Mundi.” He wasn’t just putting together words just for fun, he means it.

In an interview with Jeremie on TOUCHDOWN on Live FM, the hostess asked him who his celebrity crush was: “Who is my celebrity crush? Right now, it’s Berla Mundi.”

“She will do awesome, she is very talented.” He added when Jeremie mentioned that Mundi was a part of the Live FM team.

Who knows he might record a new song dedicated to Berla on his upcoming mix tape, BAR (Best African Rapper) 2.

On the show, he also revealed that he had a fear of the dark, “the dark. I can’t do the dark, this dumsor thing it doesn’t work with me. I don’t like, people don’t like it but I really don’t like.

You don’t know what is in there, at least there be some small light in there to guide your steps there or something. That’s why I always have my phone with me so yeah I don’t like dark places.”

Make a date with Jeremie on TOUCHDOWN between Mondays and Thursdays every week on Live FM between 7 and 10pm.

#LiveExclusive : Ghana Meets Naija to be held In Nigeria!